How Out Is Out Enough for Gay Candidates Like Pete Buttigieg? High-profile LGBTQ candidates walk a tightrope when it comes to low-information voters.

We live in a bubble if we believe everyone in America knows Pete Buttigieg is gay. Not everyone knows his marriage was featured in The New York Times. Nor did everyone see him and Chasten on the cover of Time. We may have planned a whole party around their 60 Minutes interview, we might know the name of their one-eyed rescue dog, and we could have a picture of them kissing as the background on phones, but we’re not most people.

Our community started paying attention to Pete’s campaign early last year, giving it time and money since the beginning. We’ve promoted it on social media and encouraged our friends to follow along. Even Pete’s LGBTQ+ critics, or those merely supporting other candidates, are closely watching his candidacy.

However, the voters who decide the outcome of elections at the margins, low-information voters, are not as engaged as we are. By definition, they’re making their decisions based on limited research. They’ve seen a few ads that made them feel good, or they’ve found a candidate who aligns with them on one or two issues; and then they check out until election day. (I myself am a low-information supporter of Amy Klobuchar as a second-choice candidate. I was shocked to discover, after giving her $50, that her website is totally silent on LGBTQ+ issues)

The ability to attract the support of sufficient numbers of low-information voters to win an election is the art of modern politics. For LGBTQ+ politicians, in particular, this task presents an especially fraught dilemma. If a gay man wants to win them, or claim to have won them, on the basis of his platform and record alone, his best choice is to say as little as possible about being gay —  sometimes to the extreme of saying nothing at all. If he’s running as openly gay candidate who wants people to evaluate that identity as relevant to his candidacy, he has to decide how best to deploy the information to his advantage. However much he chooses to be “out” for the electorate, the bigots in our society blindly committed to their bigotry will never vote for him if they know.

We saw one such person in a video recorded during the caucus in Cresco, Iowa, a community typical of the Obama-to-Trump rural areas targeted by the Buttigieg campaign. During the caucus, a woman there wanted her vote back after learning Pete’s a gay man with a husband. She asked a Buttigieg campaign volunteer, “How come this has never been brought out before?” and when a Buttigieg volunteer informed her, “It’s common knowledge,” she responded, “I never heard it.”

The truth of Pete’s campaign is that you won’t find Chasten in it if you haven’t been paying attention since the beginning, if no one tells you about him, or if you don’t know where to look. The campaign’s official website, PeteForAmerica.com, is the only one of the major Democratic campaigns to lack a photo of the candidate’s spouse — a notable omission for a candidate whose marriage is “common knowledge.”

Low-information voters who saw Pete’s ads in Iowa over the past few months and then visited his website would have scrolled past the following images: Pete as a candidate, Pete as a boy, Pete as a mayor, Pete as a son, Pete as a soldier. What no one would have seen is Pete as a husband. In August, the campaign removed the photo of Pete and Chasten holding hands that had appeared on the site since the campaign’s official South Bend, Ind., launch in April.

People prefer to assume we’re all straight and cisgender, and they will continue to do so for as long as we let them. Telling them the truth of our lives is the only sure way to make them aware of their misconception. If Pete intends to confirm with his candidacy that America is ready for a gay president, then his campaign shouldn’t worry that a picture with his husband might cost him votes. We don’t find it odd to see the straight candidates pictured with their spouses.

The Buttigieg campaign could have chosen a different approach.

During Maryland’s 2018 gubernatorial race, state Sen. Rich Madaleno was one of nine candidates running in the Democratic primary. As the state’s first openly gay legislator, first openly gay state senator, and a leader in the state’s fight for marriage equality, Madaleno was commonly known to be gay. Anyone familiar with his 16 years as an elected official — including his constituents — knew it.

But that’s not everyone in the state. At the time Madaleno was running for governor, according to Maryland’s foremost political pollster at Goucher College, 77 percent (+/- 4.8 percentage points) of likely voters were completely unfamiliar with him.

Using a campaign ad created to introduce himself to those voters, Madaleno made it unmistakeably clear that he’s a gay man with a husband. Over the course of the 30-second video, he’s seen performing various “jobs,” and as each appears, a caption is superimposed on it to reinforce what he thinks important for voters to know about him.

The word “HUSBAND” accompanies an image of Rich and Mark, his partner of nearly two decades, sitting on their couch. Mark’s hand rests on Rich’s knee as the two men trade the sort of look any couple might share when they’ve built a life together. As the video transitions to “FATHER,” Rich and Mark are joined by their two children. 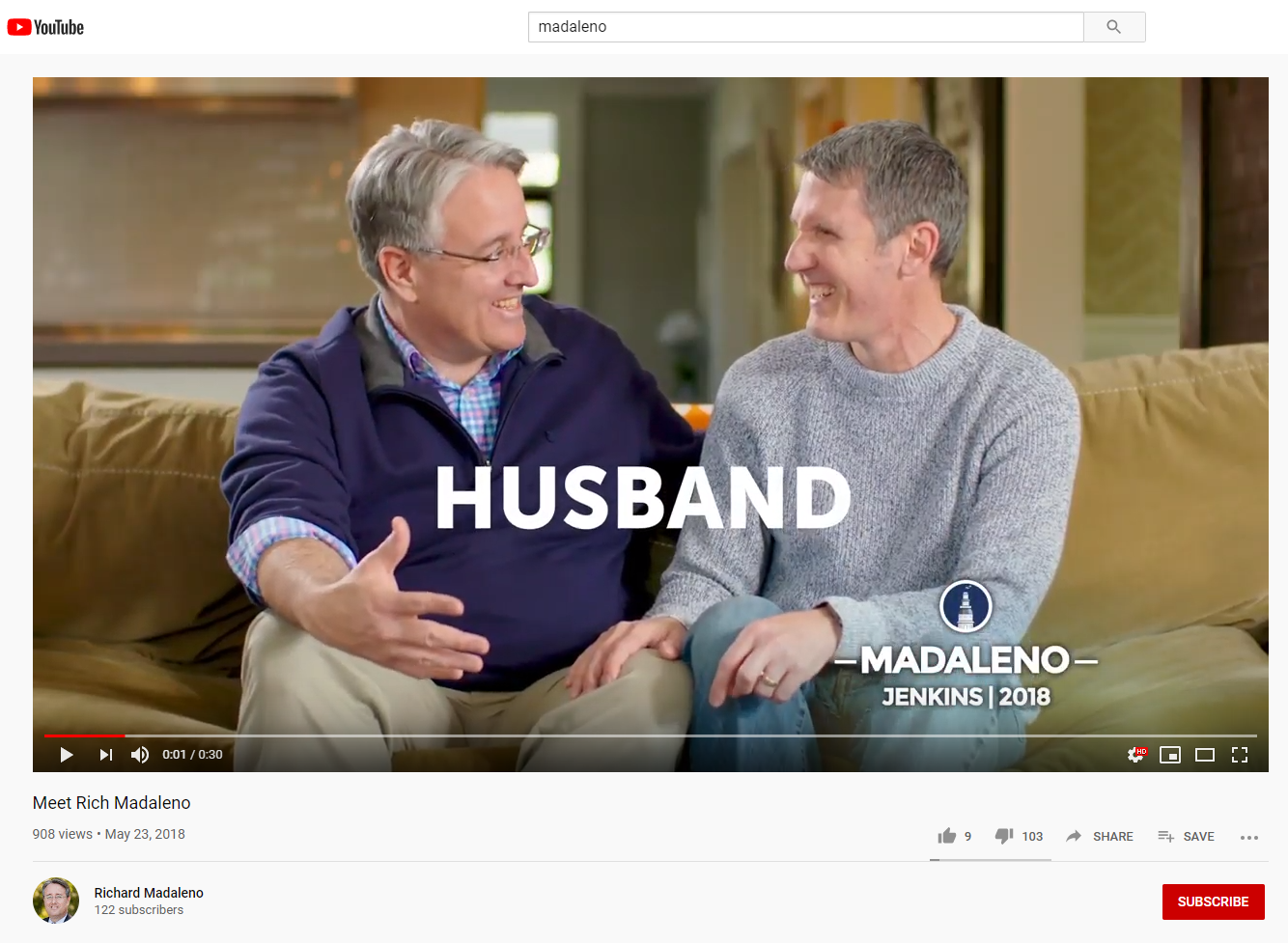 The Madaleno campaign ran the ad in various local media markets, putting it into hundreds of thousands of households. No matter how low-information a voter was, she would have known after seeing the ad that a vote for Madaleno was also a vote for his husband and their children to live with him in the governor’s mansion. She would have known it because Madaleno himself said so.

For some Maryland voters, many of whom are just as bigoted as any in Iowa, the ad may have been “too gay.” And given the crowded nature of the primary, one could argue the ad cost Madaleno the race. But if Maryland wasn’t otherwise ready for an openly gay governor, the content of his ad wasn’t going to change that.

Regardless of its impact to the outcome of the election, Madaleno’s ad brought every Marylander closer to having an openly LGBTQ+ governor. His campaign expanded the impact of Heather Mizeur, whose 2014 bid for governor marked the first time an openly LGBTQ+ candidate sought the office. She too had visibly featured her spouse, Deborah, in her race. Madaleno, with his husband in plain sight, reiterated for voters in Maryland that we recognize the dignity of all families and refuse to hide our own.

As openly LGBTQ+ candidates make decisions about how best to navigate between ignorance and bigotry in pursuit of low-information voters, they should recognize that they themselves have an obligation to tell voters about their families unless it’s their deliberate hope that “common knowledge” is good enough. Either way, their choices show us what kind of candidates they are and the sort of legacy they want their campaigns to create.

Brian Gaither is a gay writer and activist living in Maryland. He’s cofounder of the Pride Foundation of Maryland and the Maryland LGBT PAC. Follow him on Twitter @briangaither.