The Biden-Harris administration is highlighting its support for the LGBTQ+ community and raising concerns that Republicans are attacking Americans' rights this election cycle.

Vice President Kamala Harris made history Tuesday evening by hosting the first LGBTQ+ Pride Month reception by a sitting vice president at her residence. Her home at the Naval Observatory in northwest Washington, D.C., was a warm welcome for LGBTQ+ community members and friends.

Like other Pride events since last week's Supreme Court decision on Roe v. Wade, it celebrated equality for LGBTQ+ people and called for action.

This month, Harris and Second Gentleman Douglas Emhoff surprised the crowd at D.C.'s Capital Pride Festival by becoming the first sitting vice president to speak at an LGBTQ+ Pride Festival. Last year, her walk in an LGBTQ+ Pride march made her the first American vice president to do so. Emhoff was not at Tuesday's event because he is currently heading a presidential delegation to attend the inauguration of Ferdinand Romualdez Marcos Jr. as the new president of the Philippines on Thursday.

Speaking in the residence’s swimming pool area, she said, “When I got the call for the office of the VP, and they said ‘Shangela,’ and I said, ‘What?’ and they said ‘Shangela, would you like to handle the welcome for the evening?’ I said, ‘Well, let me run over to my closet, pull out my white suit, my white hat, and in my best Olivia Pope voice, I told them, ‘It’s handled!” 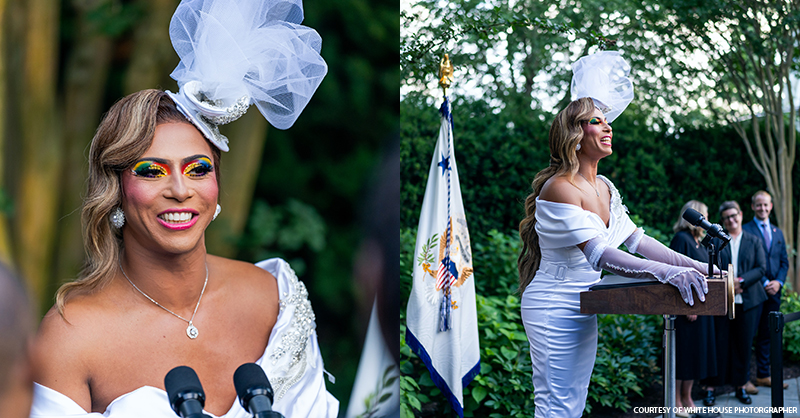 The energized crowd laughed with amusement.

In 2019, Shangela showed then-Sen. Harris how to properly clack a fan during an appearance at Los Angeles gay bar the Abbey.

For one couple in attendance, the night was an unforgettable anniversary celebration.

Kris Perry and Sandy Stier are pioneers in the fight for marriage equality. They won the historic Supreme Court ruling that struck down California's Proposition 8 in 2013. Harris had married the pair nine years ago to the day exactly. The couple introduced the vice president before she took the stage to address the crowd.

When Harris was attorney general of California, she refused to defend a constitutional amendment that prohibited same-sex marriages, ultimately leading to a Supreme Court ruling against the proponents and affirming the lower court's ruling that the measure was unconstitutional.

Following the court’s ruling, Harris and her staff marched to San Francisco City Hall to celebrate the historic moment for equality and conduct marriages.

“The next thing you knew, the place was packed with people who were experiencing pure joy,” Harris said, swept up in the memory of the moment and beaming with pride.

Stier and Perry reflected on the moment’s significance in an interview with The Advocate before the reception.

“The wonderful thing about today is this is the day that Vice President, then-Attorney General Harris married us, the first same-sex couple to be married in California, on the Harvey Milk balcony at San Francisco City Hall,” Perry said.

“That day will forever be etched in our memories for so many reasons. It was a historic place, it was a historic moment, and tonight we go to the vice president’s residence to celebrate Pride, but also to celebrate our ninth anniversary that she personally made possible with her officiating the wedding. But more importantly, as a political leader, she did not defend a discriminatory law in our state that eventually was struck down by the Supreme Court of the United States,” she added.

Due to the Supreme Court’s recent decision in Dobbs v. Jackson Women’s Health Organization, which overturned Roe v. Wade, Perry said that celebrating their anniversary with the vice president was especially meaningful given that a handful of justices had just deprived Americans of rights they assumed were protected.

“Leaders like Vice President Harris will have to keep defending laws and finding new ways to support fundamental rights over time,” she said. “Not just same-sex, but all civil rights.”

That theme of rights permeated Harris’s remarks. It is vital that Democrats protect Americans’ rights from further deterioration, she warned.

“In moments like this,” Harris said, “[when the] United States Supreme Court is eroding constitutional values and principles, like the right to privacy, we will not be deterred because we know that it is our mission, our goal, and our joy to stand with Pride and to fight to maintain these rights.”

LGBTQ+ rights have been a focus of the administration since the beginning. President Joe Biden issued an executive order prohibiting discrimination against LGBTQ+ Americans on his first day in office. As a result of that order, federal agencies must fully enforce civil rights laws to prevent employment discrimination based on sexual orientation and gender identity. Last week, the administration announced a proposal to Title IX that included better protection for LGBTQ+ students and specifically transgender students.

“When we celebrate Pride, it’s because we understand not only the strength of what we have accomplished, and the fight for equality, but we [also] understand the fragility of these gains, and so we know what we must do to be vigilant and maintain [those rights],” Harris said. Josh Hsu, senior counsel for the vice president, also emphasized how the ruling could have far-reaching consequences for American society.

“Just because you have a decision that takes away a right from women doesn’t mean that it doesn’t have a broader impact on the entire country,” Hsu told The Advocate. “The implications of a decision like Dobbs could be undermining an ability for a family to decide whether they’re going to have kids; whether or not they can use IVF.”

Many extra embryos are frozen or discarded during the IVF procedure; some frozen embryos do not survive the thawing process, and some women may need fetal reduction if too many viable embryos develop in the uterus, according to the Mayo Clinic.

The White House points out that embryos are routinely destroyed during the IVF process, which raises the question of whether the ruling will ban fertility treatments and other assisted reproductive technologies.

“Are [conservatives] going to create civil liability such that family planning clinics that provide IVF treatments can no longer operate?” the official asked.

According to Hsu, the push to strip Americans of their current rights is targeted and coordinated. LGBTQ+ rights groups have raised concerns about marriage equality being overturned following the Dobbs ruling. Justice Clarence Thomas wrote a concurring opinion that the high court should revisit cases granting marriage equality, freedom of intimacy, and the right to use contraception.

While Stier and Perry were committed before their wedding, Stier said that a legal marriage brings something else to the relationship.

“There is something about legal, federally recognized marriage that gives you an increased sense of security,” Stier explained.

Not only has married life profoundly impacted her sense of self, but she has also found immense joy in witnessing other marriages. “Just to experience that kind of collective joy and community around marriage has been amazing,” she said.

However, with the ruling and Thomas's opinion, that security and joy may be threatened.

Following the Supreme Court's decision, Harris said, “This is the first time in the history of our nation that a constitutional right has been taken from the people of America. And what is that, right? — some might ask.”

Health
Monkeypox: 1-on-1 With the White House's Response Deputy Coordinator
2 hours 44 min ago